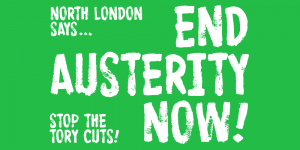 Enfield North Labour Party passed a “No cuts budget” resolution on 17th January. Members are urging the Labour council to refuse to pass the catastrophic Tory cuts that are slashing public services, making an irreparable damage to our community.

The council is preparing to implement further £18 million-worth of Tory cuts, even though it has already cut £178 million since 2010. More vital services will be cut which will affect the poorest and most vulnerable people in Enfield. Already 39% children in our borough live in poverty, according to End Child Poverty coalition – how many more after the newest cuts?

The resolution calls for the council to use all the legal means at their disposal. This includes use of the financial reserves and borrowing powers as well as the demand on the central government to immediately grant funding back to pre-austerity 2010 levels.

The resolution calls for building a local and national campaign of resistance to austerity that should include trade unions, community groups and ordinary residents.

Members are planning a lobby of the council on the budget setting date on 27th February. They are inviting all community groups and residents affected by cuts to join. Austerity is a choice, and it has to stop.