The Brexit deal Theresa May has negotiated is a bad deal and Labour will vote against it next week. 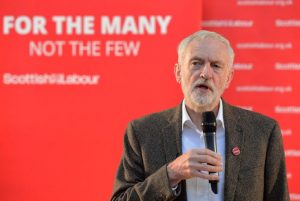 If the government can’t pass its most important legislation then there must be a general election.

I put it like this: if you’re living in Tottenham, you may well have voted to remain. You’ve got high bills, rising debts, you’re in insecure work, you struggle to make your wages stretch, you may be on Universal Credit and forced to use a food bank. You’re up against it.

If you’re living in Mansfield, you’re likely to have voted to leave. You’ve got high bills, rising debts, you’re in insecure work, you struggle to make your wages stretch, you may be on Universal Credit and forced to use a food bank. You’re up against it.

But you’re not against each other.

Only Labour can bring people together based on their common interests. Whether they voted to leave or remain, people know that the system isn’t working for them.

Because it’s a system rigged against the many, to protect the interests of the few – that’s the real cause of inequality and insecurity in Tottenham, Mansfield and across the country.

That’s why an election is so urgent – and why we must win it. And what will make the difference? Your campaigning and your energy.

So in a speech today in Wakefield, I sent the prime minister a message: if you’re so confident in your deal, call the election, and let the people decide.

But if you don’t, Labour will table a motion of no confidence in the government, at the moment when we judge it has the best chance of success.

If we can’t get an election, then we’ll keep all options on the table, including campaigning for a public vote, as our members decided at Conference last September.

But an election is the best outcome because it enables us to tackle the Tories’ cuts to public services, their awful Universal Credit, rising homelessness, and all the other issues that are damaging our communities.

Together, we have the chance to transform our country for the many, not the few.