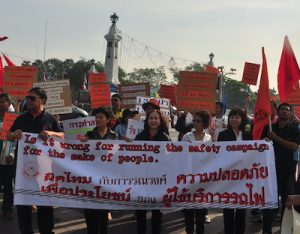 The leaders of Thailand’s State Railway Workers Union (SRUT) have faced dismissals and enormous fines because of their efforts to point out unsafe working conditions on the country’s railways.

At the request of the SRUT and the ITF, LabourStart has launched a campaign calling on the Thai government and the employer to drop the claims against the union, and to return their back pay and benefits.  Please show your support here:

And please share this message with your friends, family and fellow union members.