Solidarity with refugees and migrants: Stop the scapegoating! 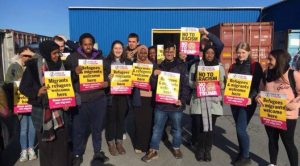 Join the protest at 6pm at the Home Office in London to protest in solidarity with refugees and migrants and to challenge the disgusting racist scapegoating being used by the Tory government and the establishment. Outside of London? Contact us if you are planning a local protest on the day in your town or city.

The establishment has whipped up a frenzy of racism towards refugees and migrants after a hundred or so refugees were reported to have crossed the Channel since Christmas Day. This latest attack on refugees and migrants comes off the back of the Tories’ ‘hostile environment’ that has aimed to create a climate of division.

The number of clandestine arrivals at UK southern coastal ports in 2017-18 was 1,832, a 23% decrease on the 2,366 of these arrivals the previous year. Don’t believe the lies that are being used to dehumanise people who are escaping war and poverty to seek a better life for their families and blame them for the problems created by politicians and their austerity agenda. We say #RefugeesWelcome #MigrantsWelcome