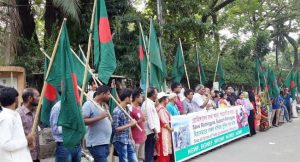 Leaders of 5-garment workers federations call to the international community, including Europe, USA & Canada, to cancel trade concession to Myanmanr for unleashing genocide against Rohingya. They have praised the government for taking courageous decision to provide shelter to Rohingya refugees in Bangladesh.

The trade union leaders made the call today, October 4, 2017 from in front of the National Press Club in Dhaka city at launching ceremony of the ‘Garment workers’ emergency solidarity fund for Rohingya’. Five garment workers federations jointly organizing the fund to help Rohingya refugees, who fled to Bangladesh for safety from genocide unleashed by Myanmar army in Rakhain province of that country.

The Labour leaders urged the members of Garment Family that is 4.2 million garment workers & factory owners to voice for solving Rohingya problem & come forward TO help the Rohingya refugees.

They called upon the buyer & brands of different countries, including Europe, USA & Canada, who sources garment products from Myanmar to refrain from importing from Myanmar if the genocide is not stopped & Rohingya problem is not solved immediately. They also called upon the consumers of Europe, USA & Canada to boycott Myanmar’s products to protest genocide against Rohingya.

The labour leaders demanded immediate repatriation of Rohingya refugees to their country & creation of ‘safe zone’ inside Rakhain state of Myanmar for their safe living as per recommendations of the ‘Kofi Anan Commission’.