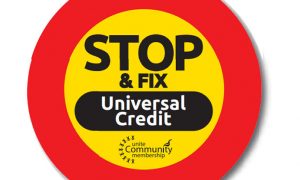 Nearest meeting to here: Central London at 14.00 in Costa Coffee: Oxford Street and turn left on to Great Portland Street.

This Christmas will be cancelled for thousands of families claiming the new benefit Universal Credit. Despite knowing Universal Credit causes serious problems for claimants, Theresa May’s Tory government is pressing ahead and rolling it out to thousands of people who will have to wait weeks to receive any money.

Claimants are descending into debt, relying on food banks, getting into rent arrears and in many cases getting evicted from their homes because of in- built problems with Universal Credit.

On Saturday 2 December 2017 Unite Community will be staging a national day of action against Universal Credit to send a message to the Tory government that they must STOP & FIX Universal Credit before rolling it out and further or thousands of families face a cold a hungry Christmas and the threat of losing their homes.

Who gets Universal Credit

Seven million households will be affected, including over one million low paid part-time workers. For the first time ever people in work could face being sanctioned (having their benefits stopped) if they don’t prove to the job centre that they’re searching for better paid work or more hours.

Unite is calling on the government to:

Tell us your story

Get in touch and tell us about your Universal Credit stories. Send your stories to Liane.groves@unitetheunion.org