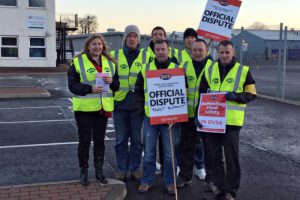 UPDATE: PCS report that the action is so solid at Barnet they will NOT need to picket tomorrow morning.

Members of the Public and Commercial Services Union (PCS) in the Driver and Vehicle Standards Agency (DVSA) will take 48 hour strike action on Monday 4th December ending at Midnight on the 5th December. This adds to the action short of a strike which began last week (23rd) in a dispute over the new driving test and also working patterns.

This action has already led to hundreds of tests being cancelled in the first week of the action.

In a perverse move DVSA has withdrawn overtime from striking workers and also imposed leave schedules meaning that an even greater backlog of thousands of tests is inevitable due to the imposed reductions in service.

A ballot in October saw an 84% vote for strike action on a 70% turnout.

The strike action across the DVSA which begins on the 4th December will see up to 14,000 driving tests cancelled on the day the new driving test is launched.

Other effects of the action include reduced roadside checks on vehicles, reduced enforcement checks on lorries and other vehicles coming into the U.K and a significant reduction of tachograph testing.

“PCS members in the DVSA have tried to negotiate around their concerns but the door has been slammed shut in their face. They now feel they have no alternative but to take industrial action to bring home to the public how damaging the DVSA proposals are. No one takes strike action lightly and we acknowledge the disruption to the driving tests for learner drivers keen to pass their test but the Government could avoid this strike even now at the 11th hour by agreeing to serious talks and withdrawing their most damaging proposals. I have today written to the Transport Minister Chris Grayling urging him to intervene.”

Other picket lines in the SERTUC region can be found here https://www.pcs.org.uk/campaigns/pcs-fighting-attacks-on-staff-in-dvsa/support-pcs-dvsa-picket-lines

Mark Serwotka is available for interviews on Monday 4th Dec from 1pm at Millbank studio.

The PCS letter to Chris Grayling is available here https://www.pcs.org.uk/sites/default/files/site_assets/campaigns/2017/Letter%20to%20Chris%20Grayling%20MP%2030%20november.pdf

PCS is one of the UK’s largest unions and represents civil and public servants in central government and in parts of government transferred to the private sector. Mark Serwotka is the general secretary and the president is Janice Godrich – on Twitter @janicegodrich