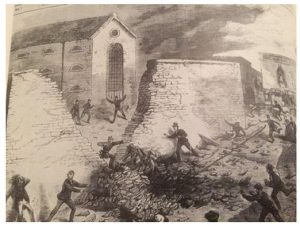 On Sunday 10th December, we will be commemorating the 150th anniversary of the Clerkenwell Prison explosions that occurred on 13th December, 1867. In an attempt to explode a prison wall, it, accidentally inflicted more casualties than the Birmingham Pub bomb of 1974 and was to start a repressive period of anti – Irish racism in Britain during the Victorian times. Michael Barrett was the last person to be, publicly, hanged for his part in this Fenian conspiracy and gave his name to the English language, “Taking the Mick.”

We will meet at 3pm on Sunday at Farringdon tube station. Peter Middleton will be conducting the tour and we will visit the place where Michael Barrett was hanged. It will be concluded with a candle lit vigil in Clerkenwell Close.