A Report from Stand Up to Racism Conference 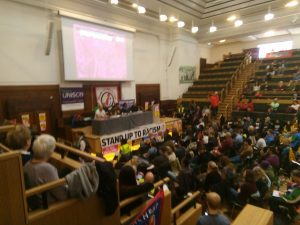 Although I only managed to get to the second half of Saturday’s Stand Up to Racism conference due to attending SERTUC in the morning, I did manage to attend a particularly poignant session in the afternoon that was not only important in itself, but that has been demonstrated as exceptional vital by events today. It was held in the afternoon on the Grenfell Fire and social cleansing, with an extremely strong range of speakers.

Activist rapper Lowkey, himself from from Kensington, spoke eloquently on the very long history of working class residents of the area having to campaign for their rights to live there. This, in fact, goes back before it would have been considered part of London, or even particularly urbanised.

Lucy Masoud, of the Chelsea Fire Brigades Union spoke next. She described her colleagues’ experiences of facing the terrible blaze itself (easily the worst actual fire most of them had ever seen, even in long careers). She finished with the fire fighters’ resolve to demonstrate through thorough proof that whatever the proximate cause of the initial blaze, the fundamental cause has been austerity.

We heard from two young survivors, Tomassina Hessel and Bellal El Guenuni, who talked about how young people had come together in the emergency to try to save lives, something that the media has largely ignored about this very ethnically diverse, solidly working class, community. They also told us that most of the survivors of the tower are still not in permanent homes.

The last speaker was Glyn Harris, a campaigning housing worker and author on the subject. He related how racism has always affecting housing policy, with members of ethnic minorities often end up in housing that the least desirable and safe. It is also the least economically secure, as witnessed in the way the sub-prime mortgage scandal that triggered the great economic crash 10 years ago.

The speakers all had there own take, but they were all pointing to the intersection between racism and austerity and the way that the basic, and totally avoidable, failure of authorities in their duties toward the public are represented by the Grenfell tragedy. It is fitting, then, they are all proved completely right by the Conservatives being forced to day to confirm that despite promises, they have no intention of providing fire prevention systems for high-density housing that could prevent future Grenfells. Ultimately, people the Tories do not care about live in that kind of housing, and it for reasons like that they we must do everything we can to get them out of office.

You can get a more full report on the conference here.