Join the demonstration tomorrow (Friday 16th of June) at the Department for Communities and Local Government. 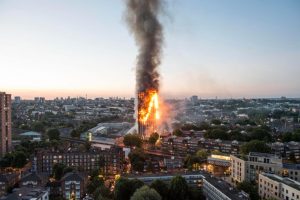 Radical Housing Network, a London-wide alliance of groups fighting for housing justice, said the Grenfell fire was a tragic consequence of systematic disinvestment in council housing alongside disregard for council tenants safety and their concerns – and called for #JusticeforGrenfell.

The catastrophe at Grenfell Tower was foreseen by a community group on the estate. Just 7 months ago, Grenfell Action Group, a member of Radical Housing Network, warned that failings in the estate management organisation’s health and safety practices were a “recipe for a future major disaster”. These warnings were dismissed by Royal Borough of Kensington & Chelsea (RBKC) council.

It’s been revealed that Gavin Barwell, Conservative Chief of Staff and ex-Minister for Housing, ‘sat on’ a report warning that tower blocks were vulnerable to fire. Last year, Barwell was one of 312 Tory MPs who voted against making properties ‘fit for human habitation’.

Radical Housing Network called the fire a horrendous example of the consequences of a combination of government cuts, local authority mismanagement, and sheer contempt for council tenants and the homes they live in – and an indictment of London’s stark housing inequality.

A spokesperson for the Radical Housing Network said:
“The fire at Grenfell is a horrific, preventable tragedy for which authorities and politicians must be held to account. Grenfell’s council tenants are not second class citizens – yet they are facing a disaster unimaginable in Kensington’s richer neighbourhoods.

“This Government, and many before it, have neglected council housing, and treated tenants as if they were second class. Nationally and locally, politicians have subjected public housing to decades of systematic disinvestment – leaving properties in a state of disrepair, and open to privatisation. Regeneration, when it has come, has been for the benefit of developers and buy-to-let landlords, who profit from luxury flats built in place of affordable homes. Across London, regeneration has meant evictions, poor quality building work, and has left tenants with little influence over the future of their estates.

“The chronic underinvestment in council housing and contempt for tenants must stop. It is an outrage that in 21st Britain, authorities cannot be trusted to provide safe housing, and that people in council properties cannot put children safely to bed at night.

“We support demands for a public inquiry into this disaster – there must be Justice for Grenfell. We call for the immediate resignation of Gavin Barwell, Theresa May’s Chief of Staff, alongside anyone else whose negligence has contributed to this tragedy.

“All Grenfell Tower residents must be offered secure, long-term local housing by RBKC, and the estate must be fully rebuilt so that no social housing is lost – this should not be an opportunity for the council to privatise homes, or for someone to make a quick buck.”

Grenfell Action Group outlined concerns on their blog over a series of posts, but were ignored by authorities. The group repeatedly warned the estate landlord, Kensington & Chelsea Tenants Management Organisation (KCTMO) of serious issues with fire safety in the blocks, highlighting the absence of basic fire protection measures including fire extinguishers and a building-wide fire alarm system. The local council, Royal Borough of Kensington Chelsea (RBKC), dismissed residents’ concerns as it pushed through a £8.6 million regeneration scheme.

Radical Housing Network is a London-wide network of campaigns fighting for housing justice. Grenfell Action Group is a member group of RHN.