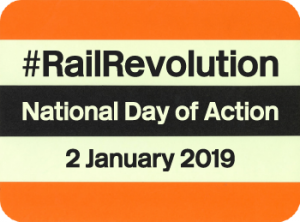 Tired of the endless tinkering with our broken privatised railway system?

It’s time for a #RailRevolution.

On Wednesday 2 January 2019, as our rail fares rise again by 3.1%, we’re joining forces with our friends at We Own It, the Association of British Commuters and NOR4NOR to organise the Rail Revolution: National Day of Action calling for radical reform.

Coinciding with the public consultation for the government’s new ‘root and branch’ review of our railways: the Williams Rail Review, we’re calling on passengers all over the country to respond in favour of a re-unified national rail network run for people not profit.

On Wednesday 2 January 2019, protests will take place at stations across the country (see list below), with a central one at London King’s Cross from 7:30-9:00am. See the Facebook event page for details, print a Bring Back British Rail placard and come join us!

Then on Friday 18 January 2019, to mark the deadline of the Williams Rail Review public consultation, we’ll be delivering our Care2 Petition to Re-nationalise our Railways signed by 118,039 people to the Department for Transport to demonstrate the sheer weight of public support for public ownership. Make sure you add your name before then: www.bringbackbritishrail.org/care2

Join Protests at Stations across the Country

Our 3rd annual SPOT conference provides an ipportunity to hear from those who have seen and experienced the reality of life under Erdogan’s authoritarian regime and invites you to find out more about what we are already doing to build international solidarity and call to account both the Turkish State and the complicity of our own government.

On the day we will be joined by the following speakers;

Turkey’s ruling powers are pushing the country towards a dictatorship and Recep Tayyip Erdogan’s attacks on democracy are impacting all sections of society. With this increasingly authoritarian regime, the state of emergency has become normalised and entrenched in law, an executive presidency created, independent media outlets shut down, academics and public-sector workers purged and criminalised, attacks on Kurdish regions intensified, opposition politicians arrested, violence against women on the rise, discrimination and hate crimes against LGBT increasing, the environment being destroyed and so the list goes on.

Meanwhile, world leaders watch unflinching, continuing to sell weapons and tip-toeing around Turkey’s human rights record. But the battle for democracy and workers’ rights in Turkey goes on and provides a ray of hope. And we know that democracy maybe denied but it is not yet lost.

Generation Rent: What is Section 21 and why does it need to be scrapped? 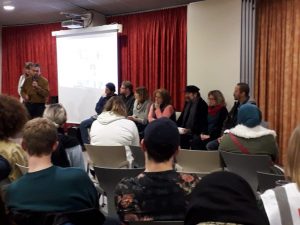 Around 90 volunteers travelled to Calais on Saturday for a weekend of solidarity with refugees organised by SUTR and Care4Calais. Despite torrential rain, all the refugee settlements in Calais had distributions, plus the large settlement at Dunkirk. Over 700 packs of winter clothing were distributed, plus hot drinks and snacks, haircutting, phone charging and wi-ii.
SUTR groups came from Birmingham, Enfield, Haringay, Newham and South London, along with trade union delegations from Warwickshire NEU and a GMB delegation from London Region and North West/Northern Ireland region.
#COATS4CALAIS
Over 3,000 refugees are currently sleeping rough in Northern France, and temperatures are rapidly dropping. Some as young as 13, with no access to clean clothes, water or shelter. So this holiday season our goal is to provide each and every one of these refugees with a warm winter coat. To do this we URGENTLY need your help.
We’re asking everyone to look in your cupboards for a winter coat you no longer wear. 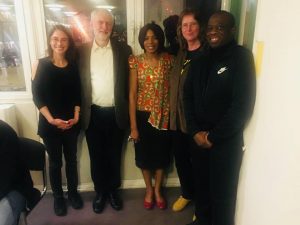 Last Monday the #Stansted15 were found guilty of a terror-related offence after they peacefully prevented a secretive deportation flight from leaving last March.
These activists are an incredible inspiration to millions of people who are enraged and horrified at the injustice of how refugees are forced to suffer at the hands of Fortress Europe and the British government’s ‘hostile environment’ that regularly sees parents stripped from their children, lives put in extreme danger as deportation flights take off to deport people, and the horror of life for those in detention centres.
A petition in support of the 15 now has over 50,000 signatures – sign now to demand justice and an end to the Hostile Environment.
The #Stanstead15 now face an uncertain future, and the implications of the use of anti-terror legislation in this case poses a threat to the civil liberties and right to protest of us all.
This sentence is intended to smash the anti-racist movement’s resistance to this government’s racist policies. The #Stanstead15 need the full solidarity of our mass, broad movement – we all must get behind them now to send the message loud and clear that refugees are welcome here, and that the charges against the #Stanstead15 heroes must be dropped.
WHAT YOU CAN DO:
1. Sign the petition
2. Write a letter in support of the #Stanstead15 to CPS, for the attention of Judith Reed, the deputy chief crown prosecutor for East of England. Send the letter by emails to eastofengland.inbox@cps.gov.uk, or post to:East Of England Complex Case Unit, CPS, County House, 100 New London Road, Chelmsford, Essex, CM2 0RG.
Suggested points that are useful to include:
1. This was a politically motivated prosecution.
2. The charge was inexplicably changed from aggrivated trespass to endangering safety four months after the action.
3. The defendents must receive lenient sentences pending their appeal of the conviction. Emma, one of the activists, who is about to give birth must receive an absolute discharge. There must be no jail sentences for any of the defendents.
4. There should be a public inquiry into how peaceful activists came to be charged with a terror-related offence. We must receive confirmation that non violent direct action is not, and could not ever be, a terror related offence.
3. Join, share, invite and support the solidarity protest at the court on 4 February, where the sentencing takes place: 8.30 – 11.30am,Chelmsford Crown Court, New Street, CM1 1EL.
4. Is your local SUTR group organising/ involved with a local solidarity protest? Many are taking place already.
5. Take a ‘solidarity selfie’ with a message of support and share on social media with #Stanstead15. You can do this yourself, with work colleagues, in your union branch, college, community, with friends, family etc. You can email any messages of solidarity or ‘solidarity selfies’ to info@standuptoracism.org.uk and we can pass on the the #Stanstead15 or share for you.
6. Can your local Stand Up To Racism group invite a speaker from #Stanstead15 to your next meeting/ rally/ protest?

Barnet Alliance: The 12 Days of Outsourcing 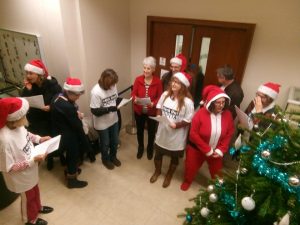 No matter which way you voted in the original referendum, if you care a 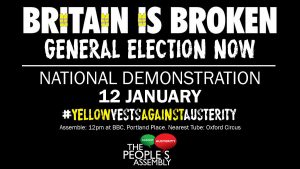 bout ending austerity, if you care about homelessness, if you want to see rail and other privatised utilities taken back into public ownership, then a general election is the only way that this can be done. In short it is driving the Tories from power which is the key question for working people in Britain today. 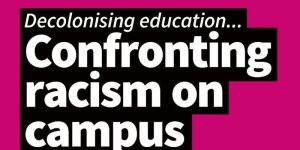 We have seen a massive rise in racism across society, from Tommy Robinson here to Trump in the US.

Students are often on the sharp end of this. Muslim students are treated as suspects from the Prevent agenda, EU nationals have their rights threatened by Brexit, and BAME students face institutional racism.

We have also recently seen attempts by the far right to gain a foothold on campus with groups like Generation Identity appearing at universities including Manchester, Bristol, Wolverhampton and Birkbeck.

This conference will bring together students, staff and education workers to discuss how we can decolonise our campuses and make them free from racism.