Agenda for Monthly Meeting on 7th of June 2018

Please submit other business to the secretary before 5pm on the 5th. 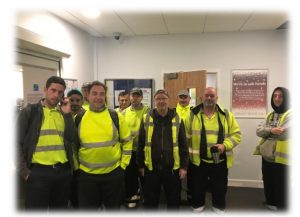 Street Scene workers have gone through many changes over the last three years. Senior managers have come and gone, and each one has brought their own ideas of how to run the service and in some cases this has meant cuts to staff and changes to the way you work. On Tuesday 5 June, 2018, Barnet councillors are being asked to agree a whole load of changes to Street Scene services, most of which will have an impact on staff and residents. In all of my time as a trade union organiser in Barnet I have never seen Street Scene workers turn up for a Barnet Council meeting. It is my view that for your voice to be heard, Street Scene workers need to turn up to meet the councillors who will vote on the proposed changes. Over the next few days Barnet UNISON will be issuing reminders to all of our members about the need to attend this meeting.
I hope that you will be able to join me there.
Solidarity,
John Burgess, Branch Secretary, Barnet UNISON 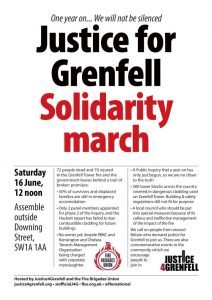 The Together Against Trump national demonstration has now been called for Friday 13th July, the day Trump visits Britain, starting at 2pm at the BBC in Portland Place and marching to Central London.

Given the worldwide outrage at Donald Trump’s aggressive, chauvinistic and belligerent policies, this is a crucial demonstration. We are urging all our supporters to take half a day off work to make sure they come to the demonstration. Please promote the demo as widely as possible. We are asking our groups and supporters across the country to organise transport to the national demonstration.

Politics for the Many: The Trade Union Case for Electoral Reform 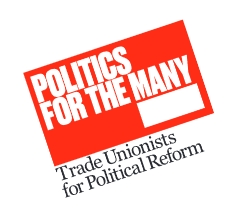 The trade union movement has always been at the vanguard of political change in Britain. And furthering economic equality goes hand in hand with political institutions that deepen political equality. To ignore the role of the political system (which concentrates political power in a minority of voters in a minority of seats) in driving political inequality, is to miss the potential for radical political change.
To truly shift power closer to the people on a long-term basis requires more than changing the underlying economic structures. Embedding changes in the political system would allow for a change in the very way we do politics, securing better social and political outcomes.
Politics for the Many: The Trade Union Case for Political Reform sets out the opportunities for the labour movement as a whole in uniting behind a broad platform of progressive political reform.
Key findings:

After a genuinely rousing talk at Hendon Labour Party from Charlotte Bence, Unite the Union organiser,

about the staff at TGI Fridays, Barnet activists will be heading down their picket line on Friday, 5pm at Covent Garden.

TGI Fridays workers have recently been hit with a huge reduction on their very low incomes, because the employer is taking 40% of the services charges that customers believe are going to them and using it to cover other costs. They are standing up for the right to a decent living, in sector where poverty pay and insecure condtions are the norm.

Details and material from Unite here.

Solidarity with the People Of Turkey sends its support to: Afrin medical aid concert 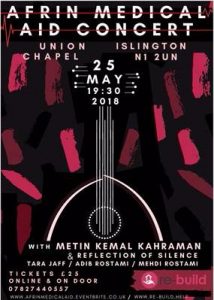 This is a night not to be missed with great performances by the Metin Kemal Kahraman brothers and the Reflection of Silence band.

We wish to create a memorable night in solidarity with Afrin and provide an opportunity to listen to great music that touches our souls so deeply.

All proceeds from this concert will go to help people displaced from Afrin, Rojava (Northern Syria). Around 450,000 civilians have been displaced and are in urgent need of aid. In the wake of this humanitarian crisis, Re-build as one of the few charities helping the region. The proceeds of this concert will be used to purchase an orthopaedic medical device costing £30,000.

By purchasing a ticket you can help us get one step closer to buying this device. 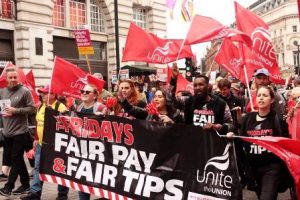 Workers at two UK restaurants of the US-based franchise chain TGI Friday’s struck for 24 hours on May 18 after being given two days’ notice that they would be stripped of 40% of their income from tips – a loss of up to GBP 250 per month. Workers at two other TGI Friday’s locations have voted 100% in favor of possible strike action on June 25, with other locations set to follow.

As the strikes commenced on May 18, The IUF-affiliated Unite held lunchtime rallies at the restaurants to support the strikers before moving on to a mass low-pay rally in Central London including McDonald’s workers.

You can support the fight back against exploitation and low pay – CLICK HERE to send a message to CEO Karen Forrester, telling the company you support the workers’ demands and urging talks with Unite.

Interesting Discussion Piece on Building the Movement from Unions21

“Jack Jones used to say that he was a trade unionist first and a member of the T&G second. This philosophy underpinned the social contract and a period of unprecedented levels of union membership. Today’s generation of trade unionists face one hell of a responsibility. We should follow Jack’s philosophy and face it collectively, putting the needs of workers and movement overall first. If we do nothing we are odds on to become the living (and dying) embodiment of Robert Taylor’s suggestion that we are too set in our ways to reform ourselves to reprise the role that movement played in shaping the old world, which for all its faults, was one in which working people, through the institutions that had built, had a far greater say over working life. “

The Return of Barnet Alliance for Public Services: Time to Kick Out Capita! 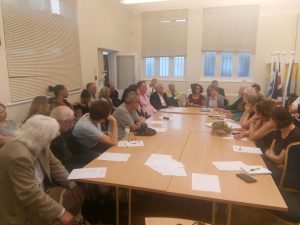 Last night, one of London’s longest running anti-austerity campaigns reconvened with a packed meeting at Finchley’s Greek Cypriot Centre. At our last trades council meeting on Thursday, we had resolved to get organising the re-elected Tory council as soon as possible, and this was an excellent start.

The initial presentation came from the one and only Mr Reasonable, John Dix, who had a comprehensive report on just how bad the past five years of mismanagement by Capita, the woefully incompetent and self-serving outsourcing giant to which the Conservatives have entrusted almost our entire borough. The Tories claim that the deal saves money, which might even be true if over-billing, contract variation and “special projects” weren’t absolutely rife. Combine this with the Tories failing to make even the most limited council tax rises for many years (even when their associates in other councils were doing so!) and the fact that Capita fees, astonishingly, rise with RPI inflation and there is a multi-million pound shortfall coming in Barnet’s finances. Auditors have expressed severe doubts that the Tories can possibly fill the gap by 2020 or 2021. You can read John’s full report on his blog.

John was followed by fellow campaigning blogger, Roger Titchbourne of the Barnet Eye. Roger issued a call to arms for activists from across the movement and different parties to unite under a simple slogan: Kick Out Capita! This is going to be the new focus for BAPS, and we’ll be starting with a series of musical and cultural events around the borough.

Finally, we were joined by a very special guest and great friend, John McDonnell MP. The shadow chancellor joined us fresh from address the PCS public sector union’s conference, and spoke about how that union was taking its own action to save essential services. He reiterated that the Labour Party has committed to ending privatisation and bringing failing contracts like Capita back in-house where they belong. Research by the University of Greenwich has shown that far from costing money, this approach would pay for itself in a matter of years. Answering question from some of BAPS’ members, John also touched on some other areas:

The relaunch was an excellent step in the right direction. Now we have to get the message out there and take the fight to Capita. BAPS will now be meeting every Tuesday at 6.30pm in the Cypriot Centre. Why not come along and join the movement against corporate greed to make Barnet a better place to live?