A tribute to Jayaben Desai: An unlikely and reluctant star of the British trade union movement 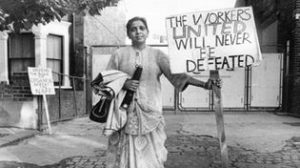 As one of the sacked women workers employed by Grunwick, a film-processing firm based in north London, Jayaben fought for better pay, conditions and dignity for workers in 1976 and 1977, on behalf of 137 sacked and poorly paid Asian women. At first she and her fellow workers were not in a trade union, but after a visit to the Trades Union Congress, she and her workmates joined Apex, which is now part of the GMB. Their struggle was supported by Brent Trades Council.

This was the beginning of a legendary battle for trade union rights, it was to become a watershed for British trade unionism and Jayaben Desai was to become an inspiration to a generation of trade unionists, and beyond. Famously, she told her factory manager, “What you are running is not a factory, it is a zoo. But in a zoo there are many types of animals. Some are monkeys who dance on your fingertips. Others are lions who can bite your head off. We are those lions, Mr Manager”. Jayaben Desai, union activist was born 2 April 1933 and died 23 December 2010.

This Black History celebration event will feature Jayaben Desai’s struggle and will allow some prominent modern day trade unionists to describe how she helped to shape their views and working lives. Kamaljeet Jandu will explore lessons for unions from that struggle in meeting the ongoing challenge of ‘organising migrant workers’ today. There will be plenty of time allowed for contributions from the audience.

Congress House is a fully accessible building. There is no charge for attending this event

If you wish to attend you must register by contacting sertucevents@tuc.org.uk, by calling 020 7467 1220, or register by post to SERTUC, Congress House, Great Russell Street, London WC1B 3LS

Members not employed by London Metropolitan University are asked to support the academic boycott in any way that they can.

This may include not doing the following:

For the avoidance of doubt, where any of the above or other related activities forms part of your contractual duties you should only refrain from doing them after your head of department (or line manager) has given you prior permission to do so. UCU is not asking or encouraging academics to act in breach of their contracts of employment. In the event of any doubt, before acting advice should be sought from the union or clarification sought from your line manager.

Important UCU members employed by London Metropolitan University must not participate in the academic boycott in order to protect their contractual position.

Day of Activity: Middlesex University at 4pm on Thursday

As part of a last push to get people to register to vote, friends of Barnet Trades Council are going to meet outside Middlesex University on the Borroughs at 4pm on Thursday the 18th. Come and join in! 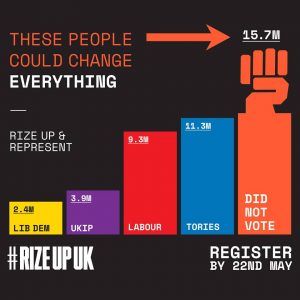 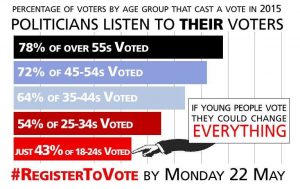 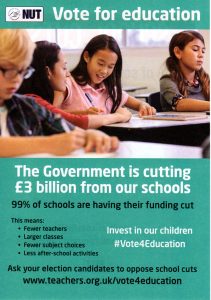 LSE University cleaners to strike every week, indefinitely until they win equality 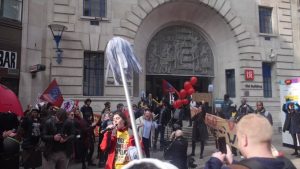 Migrant workers at the London School of Economics University begin indefinite programme of strike action over unequal treatment and terms and conditions on 11 May. An almost entirely migrant workforce of outsourced cleaners is about to embark on an indefinite programme of strike action over the LSE’s refusal to grant them simple equality with their in-house counterparts. Read more here. 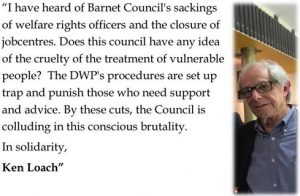 As a result of consultation we have now learnt that the two welfare rights workers (now to be referred to as the “Barnet Two”) are not being sacked in order to make CUTS, they are being sacked because vulnerable families will get a better service without them!

Before I address the issue of why it is so wrong to sack the Welfare Rights workers I want to highlight this scene in Ken Loach’s BAFTA Award winning film “I, Daniel Blake”

This scene shows the daily humiliating life experiences people in need are facing.

I’m referring to this scene, because the Barnet Council proposal is to move away from helping to sign posting. It sounds good in the highly paid consultancy circle world. BUT the grim reality this is not just a cut for two workers it is a cruel cut that will deny access to the vital information, advocacy and support for the most vulnerable families in Barnet.

Before Barnet UNISON found out that this was NOT a financial saving, we would have referred the Council back to the uncontrollable Agency/consultancy worker costs which have gone from a round £7.3 million in 2012 to 19.8 million by March 2017.

“I have heard of Barnet Council’s sackings of welfare rights officers and the closure of job centres. Does the Council have any idea of the cruelty of the treatment of vulnerable people? The DWP’s procedures are set up to trap and punish those who need support and advice. By these cuts, the Council is colluding in this conscious brutality. In solidarity, Ken Loach.”

On behalf of the Barnet Two and our branch I would like to once again thank Ken for his message of solidarity and support for the “Barnet Two” and his condemnation of the planned closures of job centres in Barnet.

“Why will this proposal cause hard to vulnerable families?”

In the past seven years there have been many changes in the way Advice in the London Borough of Barnet has been delivered.

The following organisations have either closed down or no longer do Welfare Rights Advice.

The two Welfare Rights workers are the only service that still provides comprehensive/ impartial benefits Advice up to Appeals level in Barnet. Both statutory and non-statutory organisations refer to the above workers.

In consultation it has been put to Barnet UNISON that the service could be picked up by other organisations. What is clear is that the report does not appear to know what is being provided out there in our community.

Below are some of the organisation mentioned who could pick up the work left as a result of sacking the two welfare rights workers.

Next actions:
On Tuesday 9 May at the Family Services JNCC Barnet UNISON declared a ‘failure to agree’ in response to the proposed sacking of the two welfare rights workers.

The matter has now been escalated to a meeting chaired by the Chief Executive.

If the proposal to sack the workers is not withdrawn the matter will be raised at General Functions Committee on 28 June where we will address the Leader of the Council.

Messages of support and solidarity to contactus@barnetunison.org.uk

We will be meeting this Thursday 11th of May as usual, at 7pm in the Greek Cypriot Brotherhood, North Finchley.

7.30pm – How can the Trades Council help with the elections?

The Barnet Alliance for Public Services will have a brief meeting beforehand at 6.30pm. 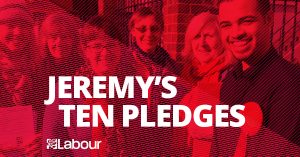