Report from the Stop the War Coalition:

Delegates and members from around the country discussed the growing push to war being led by the Trump administration and backed enthusiastically by Theresa May’s government.

The conference provided some in-depth analysis of the situation in the Middle East, the Asia Pacific, and Britain’s growing involvement in a series of wars. It also agreed that given the desperately dangerous situation, we need to strengthen and grow our organisation as a matter of urgency.

A series of action points for groups were discussed. Here are some of them.

All friends and comrades meet up at 11am at Hendon Station to get to the demonstration. 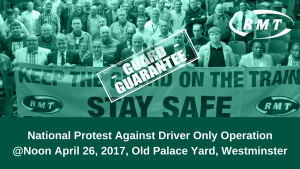 On 12th April at Westminster Magistrates Court, three companies are being prosecuted for the death of one worker and the injury of two others workers on Crossrail:  BAM Nuttall Limited, Ferrovial Agroman (UK) Ltd, and Keir Infrastructure and Overseas Ltd. 1.

They are being prosecuted in relation to three incidents that took place during the construction of the new Crossrail railway tunnel construction, which runs east to west across London.

FACK stands in solidarity with the family of Rene Tka’cik, the injured workers, Terrence Hughes and Alex Vizitiu, the Construction Safety Campaign, CSC, and London Hazards in their silent vigil outside the magistrate’s court at 2pm wearing purple forget-me-knot ribbons.  Purple ribbons are the symbol of International Workers Memorial Day 28 April every year which is dedicated to ‘Remembering the Dead and Fighting for the Living’   because no one should ever go to work and be killed. 2

Almost all deaths and injuries at work are due to employers’ mismanagement and these three companies are being prosecuted for alleged breaches of health and safety law.

There have been many reports of health and safety mismanagement of companies working on Cross Rail from blacklisting for reporting health and safety issues that went on to seriously hurt other workers, for poor welfare facilities –workers having to walk miles for a toilet..

It is completely unacceptable in 2017 that large construction companies can neglect workers health, safety and welfare and all employers must be held to account for the sake of justice for those killed and harmed, their families, and for deterrence: to stop other employers corporate killing.

“No-one we loved died from too much regulation and enforcement but from far too little. We believe everyone should be able to go work and come home safe every day as the law requires.  No employer should be able to flout the law and put anyone at risk.  Our hearts go out to Rene’s family and we hope they will get some justice, and that employers will stop hurting workers.”

Owing to tomorrow being Maunday Thursday, we will be meeting in the Bohemia Pub at 7pm, instead of the Greek Cypriot Brotherhood.

Apologies for any inconvinience. 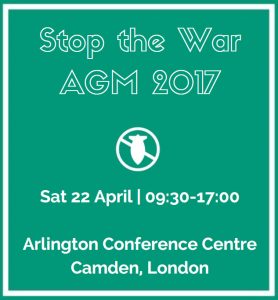 This year’s national conference, which is Stop the War’s annual general meeting for members and delegates, is taking place against the background of a 16-year long war in the Middle East and a dangerous and bigoted new US President.

• US President Trump’s aggressive, belligerent and bigoted policies, including the travel ban on people from seven predominantly Muslim countries, are galvanising millions of people to stand up against him.

• Britain continues to be militarily involved in at least seven countries both through bombing campaigns authorised by parliament and through covert military actions.

• The refugee crisis, largely a result of Western military interventions, is continuing to afflict millions of people.

• New threats are developing, including a bellicose stance of the Trump administration towards Iran and China.

All individual members with up-to-date subscriptions can register for the conference.

The date for the new members to join and attend the conference has now passed.

We will be writing to all our members individually to invite them to the conference and remind them when their membership fees are due. Please call us on 02075614830 if you would like to discuss membership and registration.

Trade union branches, trades councils, community and faith groups who have up to date affiliations can nominate two delegates.

Local groups and affiliated organisations are permitted to submit one motion to be decided upon by Stop the War members and delegates.

Delegates for local Stop the War groups are decided by local groups themselves so nominations are not required.

We will be meeting at the Greek Cypriot Centre in North Finchley this Thursday the 13th as usual.

7pm – Attendance and apologies
7.15pm – Minutes and matters arising
7.30pm – Education and the music night 22nd April
7.50pm – A brief word on good and bad news from London Underground
8pm – How the labour movement can unite with the anti-war movement in the wake of the renewed Syria bombings
8.15pm – AOB
To close 8.30pm
The Barnet Alliance for Public Services will be having their own meeting at 6.30pm beforehand.

We’re aiming to launch the London Renters Union before the end of 2017. Help us raise the final funds we need to hire a Project Coordinator!

We all know London’s housing system is broken. It is fuelling inequality and wrenching families and communities apart. It is delivering windfall gains to landlords and investors, while trapping millions of people in the insecure private rented sector, forcing them to live with the constant threat of rent hikes or eviction.
Sky-high house prices and a lack of social housing mean 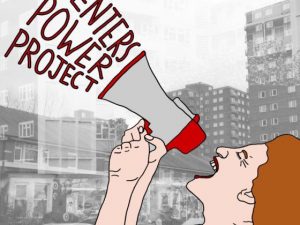 that by 2025, a majority of Londoners will be long-term private renters. London renters have higher rents and fewer rights than anywhere else in Europe, and rents are rising much faster than average wages – Londoners are now spending, on average, two-thirds of their earnings on rent.
But it doesn’t have to be this way. The Renters Power Project is in the early stages of setting up a union that will fight with and for private renters, a union that can build the power we need to secure a fairer deal for London’s renters.
Renters Power Project has arisen from cooperation between Generation Rent, Digs (Hackney Renters), Take Back The City, the Radical Housing Network and Advice4Renters. We’re working closely with organisations like Acorn and the New Economy Organisers Network. In January 2017 we held a launch event and we now have the support of over 50 housing and community groups from across the city. We plan to launch in affiliation with the national Renters Rising project.
But we need your help to take the next step. The project is growing every day, and we need to raise the funds to hire a paid Project Coordinator, two days a week.

We’re a third of the way towards our funding target, which would enable us to employ someone on Living Wage for two days a week for 6 months. Help us raise the rest!
Our ambitions for the project are huge, as is its potential. The Coordinator will take on vital administrative and development work for the project, helping us take the next step to setting up a fighting, member-led union that represents London’s renters in all their diversity.

We don’t just want your money – we need you to get involved!
A union that listens to and empowers London renters can only happen with your input. To get involved in developing our strategy and demands, or in our outreach, communications and fundraising working groups please contact renterspowerproject@gmail.com.
If you want to find out more about the Renters Power Project, or keep up with what we’re up to, like us, follow us and check out our website! You can sign-up to our mailing list here.
Website renterspowerproject.wordpress.com 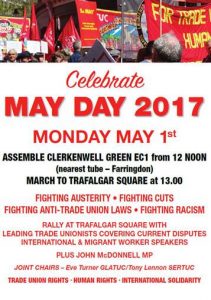 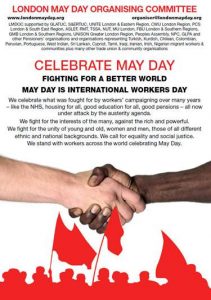