5th of November – Call for Stewards for the Save Libraries March

Hi supporters of libraries, museums, galleries and all who work in them.

Attached is a letter in today’s Ham and High. It is published too in the Barnet Times and, I hope, in the Barnet Press and Camden New Journal, which has a wrap around publicising the National Libraries, Museums and Galleries demo on 5 November.

For this demo, which starts at 12 noon from The British Library and goes via The British Museum to the National Gallery, we shall have the Metropolitan Brass Band and the speakers include Michael Rosen. The march has a KIDS4LIBRARIES group. 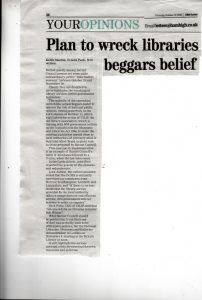 an Police are allowing us to march on the roads, but they are stretched for resources marshalling another demo the same day and advised us to recruit our own stewards. This we are doing, and our aim is to have thirty yellow-clad volunteer stewards to maintain all our health and safety.

If you are willing to be one of these thirty stewards, please email me your name and email address (keith.martin18@btinternet.com), and I shall see that you receive a briefing on what is required.

The aim of the demo is to stop the cuts to our library, museum and gallery services, and to save the jobs of all who work in them.

There is a national crisis, and we are determined to achieve these aims.

Whilst we have tried hard to support and represent our members the last 9 years have been painful, fun, tiring but invigorating but most of all it has been a privilege to have belonged to Barnet UNISON branch.

Our members have had the courage to give it a go. To get up off our knees and at least stand up for what is right.

But we can always look back and say that we have not gone missing.

We don’t leave anyone behind, even when we lost the big outsourcing to Capita and hundreds of our members were later made redundant as their jobs were scattered to the four winds. We stayed and supported, represented our members and we won some compensation for some of those who lost their jobs.

We can always say we didn’t avoid difficult decisions and we don’t run from a fight, we organise and we lead but always it must be the members who decide when and for how long we fight.

Outsourcing and job cuts has had a detrimental impact on worker and I have observed the workplace has become toxic environment. I point to the consultant’s catch phrase “More for less” as one of the most insidious and unhelpful jargon to emerge over the last decade.

“More for less” has in my opinion has contributed directly to “unsustainable and unsafe” work places; we are only just beginning to see the impact on workers mental health and wellbeing.

Over the past decade we have seen a high burn out of UNISON reps simply because the challenges and pressures that mass outsourcing brings are too much.

I have always believed in taking responsibility where you can and for me that has been in the London Borough of Barnet.

I have worked with so many wonderful and creative people both inside and outside UNISON. I have gained so much more from being in their company and most importantly listening and learning to what they have said or done.

It is in recognition of this experience and in an attempt to reflect on what has happened and think about my future and the future of the branch I have put together a film montage of the last decade in the life of Barnet UNISON. The film opens with Fremantle Care workers and campaign that shocked me and a campaign that still troubles me deeply nearly 9 years after it began. Their fight and the draconian cuts were later to be followed by the heroic Care UK 90 day strikers and our very own Your Choice Barnet care workers campaign.

Anyway enough from me.

The short film is just under 20 minutes long so make sure you have a nice drink, comfy seat you might have a few surprises from a few guest appearances.

From the LOCAL SCHOOLS NETWORK:  What ARK Schools represents for Barnet

ARK Schools [the company behind Ark Pioneer in Barnet] is in a class of its own.  It is by far the most successful and influential MAT, a ‘system leader trust’ that is constantly name-checked by ministers.  ARK’s King Solomon Academy, in Marylebone, has beenhailed as ‘the best non-selective school in Englan 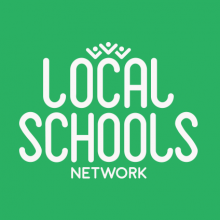 d’.  The school serves an area with high levels of child poverty;  58% of its pupils are eligible for free school meals, and a significant number speak English as an additional language.  Last year’s exam results were indeed extraordinary:  93% of students achieved A* – C in five GCSEs.

The miracle was achieved using methods developed by American charter schools – more specifically, by the ‘charter management organisation’ known as KIPP (the Knowledge is Power Program).

It is not only a question of school culture, however.  Serious money has been put into securing the King Solomon Academy’s miraculous GCSE results.  At a time when the freezing of the education budget has left all schools facing afunding cut of around 8%, ARK academies are protected by the largesse of their sponsors.

A recent report by Schools Week claims that ARK Schools received £3.6 million of private funds last year – nearly £106,000 for each school in the chain.  In the brave new world of venture philanthropy, there is nothing wrong with using profits generated offshore – most hedge funds are domiciled outside the UK – to back a privately-controlled ‘network’ of schools, whose exam results are then held up as an example to defunded local authority schools.  After all, as the former chair of the ARK Schools board, Lord Fink, told the Evening Standard:  ‘everyone does tax avoidance at some level’
ARK has also been experimenting with computer-based instruction.

In 2018, the trust plans to open the Pioneer Academy, ‘a new all-through blended learning school with an emphasis on technology’.

ARK’s Pioneer Academy – to be built on a disused football ground in Barnet – will use a version of Rocketship’s ‘classroom rotation model’.  This, in turn, ‘includes four sub-models: Station Rotation, Lab Rotation, Flipped Classroom, and Individual Rotation’.

This  is literally cut and pasted from a paper put out in 2013 by  Christensen, a professor of business administration at Harvard who is the guru of blended learning, and a firm believer in its potential to ‘disrupt’ existing systems of public education.  He sees the shift to computer-based instruction as a means of ‘eradicating rules that restrict class size and student-teacher ratios’.

ARK told the TES,  that blended learning offers ‘an opportunity for revised teacher roles’;  the Pioneer Academy proposal notes that online learning will be combined with ‘instruction and input from the teaching assistant’.

Clayton Christensen’s view is that ‘computer-based learning on a large scale is less expensive than the current labour-intensive system, and could solve the financial dilemmas facing public schools’.
ARK told the TES that blended learning will ‘improve cost efficiency through both staffing and school design efficiencies’.

SOLIDARITY WITH THE PEOPLE OF TURKEY 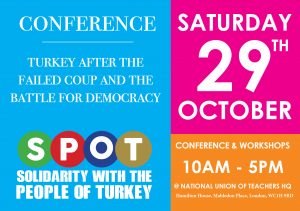 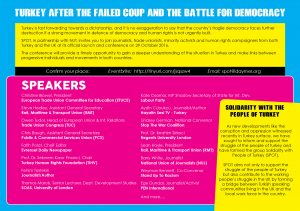 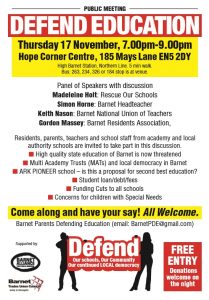 Panel of Speakers with discussion

Residents, parents, teachers and school staff from academy and local authority schools are invited to take part in this discussion.

Come along and have your say! All Welcome. Barnet Parents Defending Education (email: BarnetPDE@gmail.com)

October 11, 2016 Kieran Crowe
Event at Southend Green, Hampstead, to protest against CETA & TTIP organised by Global Justice Now London Action Network and #noTTIP, with the support of War on Want. 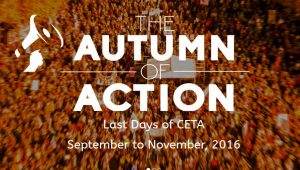 This event is on Saturday, October 15th from 11am until 3pm at Southend Green NW3 2QE, very near to the Royal Free Hospital , Hampstead.
This protest event is happening in conjunction with a number of other demonstrations against CETA taking place on the same day in Paris , Madrid , Barcelona , Sevilla, and elsewhere across Europe .
A list of all the actions happening can be found at: http://stopceta.net/
CETA is a trade deal being negotiated between the EU and Canada which poses a major threat to our democracy, public services and the environment. Like TTIP, CETA could have wide-ranging effects on our lives. If ratified, CETA would:
We have chosen to demonstrate near the Royal Free Hospital as we are very worried about the creeping tendency to privatise the NHS. In some parts of the country hospitals are already run by Virgin. CETA will mean that it is not only easier for private companies to bid for NHS services but it will be impossible for governments to stop private companies winning these contracts without suffering legal and financial consequences.
This is because of one of the most insidious parts of CETA called the ICS (investment court system) –
formerly known as the ISDS – a system of parallel justice, where international corporations will be able to sue Governments for any laws they make that effect corporations ability to make profits. These courts are held in secret and there is no right of appeal. CETA will also mean that governments have to allow private corporations to bid on services like the NHS and are therefore not allowed to protect important public services from being taken over by private companies.
If privatised parts of the NHS were to be bought back into public ownership, then the UK Government could be sued under the ICS system for billions of pounds. The same applies for railways, the education system, and any other public services.
We are demonstrating along with people all over Europe . The reason for this wave of demonstrations is that on October 18th the European Commission is meeting in Luxemburg to decide whether to approve CETA or not. If this is approved, then CETA will be signed at the EU-Canada Summit on October 27th
However, there has been no public debate either in the House of Commons or in the UK media on CETA. This is despite the fact that over 3 million Europeans voted against TTIP and CETA in the European Citizens Initiative including of which 500.000 were from the UK .
On September 17th this year the fact that 340,000 in Germany and Austria were on the streets against CETA and TTIP, there was hardly any mention of this in the British media.
In addition there was a public consultation by the European Commission on Investor State Dispute Settlement (ISDS) which was opposed by 97% of respondents.
We feel that this very toxic trade deal is being negotiated in secret without proper public and parliamentary scrutiny. If the public knew the risks that CETA posed to the NHS, democracy and our country they to would be very worried.

Listen to Keith Martin one of our heroic Save Barnet Libraries campaigners tell you why he is attending the 5th November National Libraries, Museums, Galleries demonstratio.

A Poem for the National Library Demo

“A Library with NO staff what could possibly go wrong?”

“A Library with NO staff what could possibly go wrong?”

Barnet Council announced yesterday that they are to sack 46 % of the Library staff as they use machines to keep Libraries open with no staff. I know from other library campaigners this idea is starting to spread.

This video was made at Edgware Library in Barnet during unstaffed hours to show the risks inherent in the council’s plan to cut trained staff by 47% and increase opening hours, the majority of which will be unstaffed.

During unstaffed hours
• only adults with a library card and special PIN will be able to enter
• children under 15 will be excluded unless accompanied by an adult
•15- and 16-year-olds will be allowed in only with special permission, obtained in advance
• toilets will be locked

Although the scenes were staged – and everyone participating in this video was entitled to enter the library, the children were accompanied by a parent and no one came to any harm – the risks portrayed are very real.