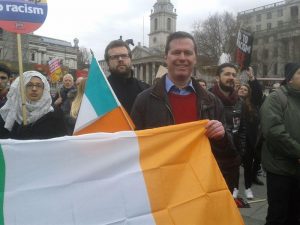 On 9th October, we will be commemorating the 80th Anniversary of the Battle of Cable Street. It is important that we have an Irish presence at this event and we will be expecting thousands of other people to attend. The Irish played a pivotal role in smashing the British Union of Fascists at the Battle of Cable Street. Not only were the Irish part of the backbone of at least 100, 000 counter demonstrators but were to outnumber the British Union of Fascists (BUF), 10 to 1. Their leader Oswald Mosley was humiliated and decided not to allow the British Fascist Black Shirts to go ahead with the march as the police could not contain the riots from the counter demonstrators. Oswald Mosley’s popularity in Britain was to sink enormously! Not even the Fascist sympathiser, King Edward VIII, could save Mosley, and we, still, question the real reason for this monarch’s abdication in the same year! It is a victorious event that the Irish in Britain should never forget!

Everyone will assemble at Altab Ali Park, London E1 at 12 noon on Sunday 9th October. Probably, we may organise an early assemble for the Irish presence. We, then, march to the Cable Street in St. George’s Gardens for a rally with speakers and stalls. Further details will follow and we could look into the possibility of organising a late afternoon event in the Cock Tavern Pub in Euston.

There is every reason to have a proper Irish presence for the 80th Anniversary of the Battle of Cable Street as it is 100 years since the 1916 Easter Rising!