Tories Out – Austerity Has Failed

At Teresa May’s first Tory Party Conference as Prime Minister the People’s Assembly with the support of the TUC will be holding a mass demonstration to say we demand an alternative to ‘Austerity Britain’.

We will demand investment in public services, in infrastructure, and in decent jobs for all. An end to scapegoating of migrants which divides our communities and whips up racism. Join us and help make sure the demonstration is as big as possible. Transport is being arranged for Barnet:

A small number have been pre-bought: please get email Helen.Davies@barnetunison.org.uk if you would like to buy one. 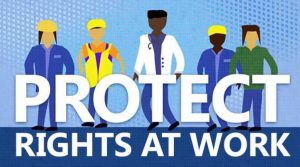 The theme for the Trades Union Councils Programme of Work for 2016 to 2017 is ‘Protect Jobs, Defend Living Standards’. It sets out a positive vision of trade unions as we know them to be: a democratic force for fairness in the modern workplace. It highlights the role that trades union councils play in developing and promoting trades unions and in campaigning on the core values of the TUC and the union movement.

The key areas of campaigning for the year are:

Read the programme in full. 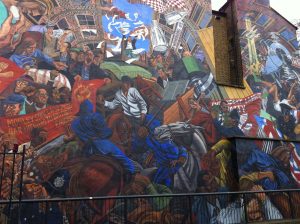 On the 9th October 2016 anti-fascists from across the UK will come together to mark the 80th anniversary of the Battle of Cable Street. Socialists, Trade Unionists and anti racism groups will march from Altab Ali Park to Cable Street where a rally will be held to commemorate the defeat of fascism in London’s East End eighty years ago. 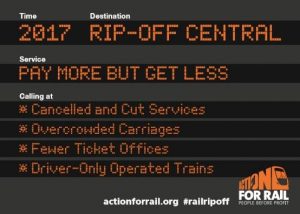 Rail fares have risen twice as fast as wages since 2010, according to TUC research. Rail workers lead public protests at stations round the country.

“Our rail fares are already the highest in Europe and today’s increases will only make that record worse. It’s time that ministers gave rail passengers a break and actually froze fares in real terms.

“Fares on the most popular routes have jumped by more than 245% since rail was privatised 20 years ago. Running a publicly owned railway would end this annual mugging of passengers and give us a network run in the interests of passengers and staff.”

Workplace 2020: An Exciting Initiative from Labour

Since the Labour Party was founded by trade unions over a century ago, the world of work has radically changed. The UK is one of the most unequal modern economies: low pay is widespread with six million workers earning less than the UK living wage.

We want to ensure that no one is left behind and that rewards are shared more evenly. That’s why we’re launching our biggest ever discussion on the workplace – so we know what the world of work should look like in 2020.

So whether you’re an employer, an employee, or both: we need to hear from you. 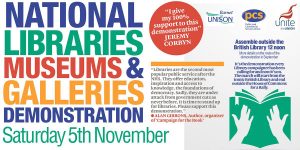 It’s the demonstration every Library & Museums campaigner has been calling for and now it’s on. The march will start from the iconic British Library and end outside the House of Commons for a Rally. Jeremy Corbyn is supporting the protest.

Public Libraries and Museums remain the lynchpin of communities, offering access to learning, reading, history, art, information and enjoyment. Libraries are, or should be, trusted public spaces for everyone. They play a crucial role in improving literacy, in combating the digital divide and in widening democratic involvement. BUT, in the UK since
2010, we’ve LOST:
• 8,000 paid and trained library workers;
• 343 libraries (600-plus including ones handed to volunteers); and
• One in five regional museums at least partially closed.

We’ve also seen:
• Libraries’ and museums’ opening hours cut;
• Budgets, education programmes and mobile/ housebound/specialist services slashed;
• An escalation in commercialisation and privatisation;
• A 93% increase in the use of volunteers in libraries;
• Income generation become the priority for almost 80% of museums.

This is a crisis and not an opportunity. Users, staff, campaigners and unions need to unite and fight before it’s too late. PCS Culture Sector, Unite the Union, Barnet UNISON & Save Barnet Libraries, and Campaign for the Book have been calling for a national demonstration to highlight the ‘clear and present danger’ to our national Library service. Support the protest on 5th November!

JEREMY CORBYN, Leader of Labour Party says: “I give my 100% support to this demonstration. The Tories have devastated our public services using austerity policies as justification. I promise that a Labour Government will act to ‘in-source’ our public and local council services and increase access to
leisure, arts and sports across the country. We will reverse the damage the Tories have done to our communities in the cities, towns and villages.”

What is going on down Barnet Council Mill Depot? 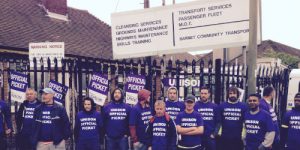