Barnet Council has used the examples of Denmark, Leeds and Peterborough to support their plan to replace Library workers with unstaffed libraries (Open+). Barnet UNISON exposed how the Danish use of unstaffed library opening differed from the Barnet plan.

The UK precedents also do not support the Council. In Leeds, Farsley Library uses Open+ technology to enable unstaffed opening hours. Unlike Barnet no cuts were made to staffed hours. Farsley is in a quiet and leafy part of Leeds. Under 18s as well as adults with a record of anti-social behaviour in libraries could not in theory enter the building during unstaffed hours. Less than 10% of local users availed themselves of the unstaffed opening hours and there were problems with the technology which prevented access to the site. After running the experiment for over a year no decision has been made. This is hardly an endorsement of unstaffed libraries.

In Peterborough the introduction of Open+ was used to cut staff hours. But Peterborough seems to have paid more attention to public safety as

“The primary role of this post is to oversee the use of the library during unstaffed hours”
This raises the following questions: When is an unstaffed library not an unstaffed library? And why not have kept existing staff on site who could have provided in depth and wider service?

This is an inadequate measure, unable to provide swift and sufficient reaction to situations, such as

• Emergency evacuations
It is hoped that the Council’s continuing desire to press on with unstaffed opening is due to a lack of information rather than disregard for the safety of library users. Barnet UNISON calls on the Council to reconsider this plan and to engage in meaningful discussion on the issues with all stakeholders in our Library Service.

To show your opposition to the Council’s plans for Barnet Libraries come to the lobby of the Full Council meeting at Hendon Town Hall on Monday 4th of April at 6pm, where the decision to go ahead with the proposal will be voted on. If the proposal is implemented then our libraries will suffer damage from which they may never recover. There is still time to Save Barnet Libraries

Open + /Unstaffed Libraries – But it is very Different in Denmark | Barnet UNISON
Barnet Council propose to cut library posts by 46%, alongside a 70% reduction of staffed hours at libraries. This is to be facilitated by Open+ technology which will…
BARNETUNISON.ME.UK

Barnet Council has a statutory duty to provide a “comprehensive and efficient service”. This legal obligation will not be met in future because, as in the Council’s own words,

the library to get advice, information and to utilise the resources in the

library. This will have the biggest impact on those who may require support

to make best use of services at static library sites or are less able, or

The proposal is based on an over-reliance on technology enabling unstaffed opening hours. This is despite the current and unparalleled failure of the Library Management System, although a contingency plan for a similar occurrence in the future is promised in the as yet unpublished Appendix L of the proposal.

However in the face of questions regarding the safety of unstaffed libraries the Council has modified its original intentions and wants to employ security guards at libraries at a cost of £785,000 a year. This is money that could be better spent by retaining library workers.

The Council’s scheme also places great emphasis on gaining income from renting out library space for commercial use, without providing any real evidence that there is demand. One of the few tangible instances of  an income generating idea in the proposal is the introduction of fines for  overdue children’s books at the same time as under 15 year old’s access to libraries is being reduced.

The Council’s proposal is a blueprint for the destruction of our libraries. It fails to recognise the range of services that a modern library should provide. It reduces accessibility, stock, space and the availability of the expertise and skills of library staff. It will make our libraries less desirable places to visit, which will see a decline in use. This will be used by the Council to close libraries in the future.

Barnet UNISON calls for the proposal to be rejected. Our Borough needs real libraries and real library professionals and para-professionals. Their absence will see Barnet pay a heavy price in the coming years as literacy levels fall, accessibility to information is reduced, and social mobility is further curtailed. 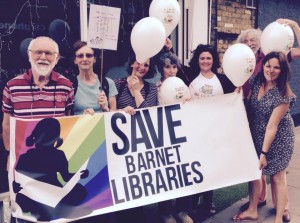 National March against Racism: Barnet Meet-up this Saturday, Argyll Street at 11.30am (next to Oxford Circus Tube) 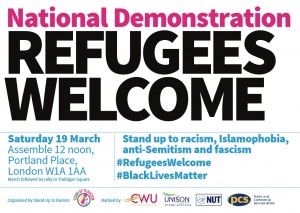 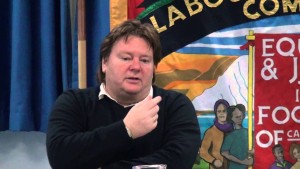 A big thank you goes out to everyone who came to our annual general meeting. Barnet TUC elected its committee for the new year and had a series of excellent speakers who sparked off an excellent debate about how we as movement can take the struggle for social justice forwards for another year.

Our first speaker was the academic and activist Linda Kaucher, who came talk about the threat posed to equality and democracy by the transatlantic treaties know as TTIP and, more urgently in her view, CETA. Although these are packaged for the public as “trade” agreements, Linda warns that they have very little if anything to do with trade, and everything to do with deregulation. Tariffs between EU and North American countries, she points out, are and have been very low for a long time, but standards of regulation to protect health, safety and the environment are much higher. Big business is lobbying hard for these treaties because it does not want such protections to get in the way of profits. An interesting debate ensued about the implications of this, and what it might mean in terms of the forthcoming EU referendum, but there was consensus that more needs to be done to oppose TTIP.

The next speaker was local councillor and new leader of the Barnet Council Labour group, Barry Rawlings. The Labour (and Lib Dem) counsellors have challenged the hard-rightwing Tory council this year by submitting complete alternative budgets, approved as valid by the council finance officers. Barry emphasised that the Tories have been pushing for massive cuts and privatisation by claiming that they have no choice in the matter because of reduced revenue (itself a Tory policy, of course, though they ignore this!), whereas the budget he’d moved showed that there was in fact a range of political choices that can be made in allocating resources. Among other things, they had had a proposal to replace all 800 social homes that are currently being lost through council regeneration projects, as well as significant defence of care services through use of a ring-fenced council take increase that would cost Barnet residents no more than 10p a week. The Labour group has invited the wider movement to have some constructive input into what choices a progressive council, that we could achieve, would do. There was very enthusiastic discussion about this, as no issue is more urgent in Barnet right now than putting a stop to the extreme austerity agenda. We all agreed though, that further resistance is also needed between now and the potential election of a new council, if there is to be any public services left to utilise, and libraries continue to be one of the key front-lines.

The evening was rounded off by Ian Hodson, national president of the Bakers, Food and Allied Workers’ Union. He’d come to our meeting directly from spending the afternoon on a picket line of striking Junior Doctors, who he hailed as fighting a battle for us all and warned us not to let them be another National Union of Mineworkers. He proceeded to give a wide-ranging speech about the goals of his union and its struggle for equal rights and fair pay for young workers, who are massively exploited at the moment. He also emphasised the importance of the struggle against rise of racism, represented by the outrageous rhetoric that David Cameron has used against refugees. BTUC will be organising a Barnet meet-up for the March 19th demonstration against racism in London in that spirit.

On Saturday 12 March, Barnet Labour Party are holding Sadiq Super Saturday and would love for you to be involved. This is a day of campaigning in the local area to try and encourage support for Sadiq on in the London Mayoral election. To support Jeremy, and in order to ensure we have a Labour Mayor in London, it’s essential that we inspire support all across the city – and what could be better than doing that whilst making friends with other like-minded people. Don’t worry if it’s your first time, as there will be experienced canvassers there to help.

Volunteers will be meeting from 2 pm, at Finchley & Golders Green Labour Office, 38 Church Lane, Barnet, London N2 8DT, and the event is scheduled to end by 4 pm