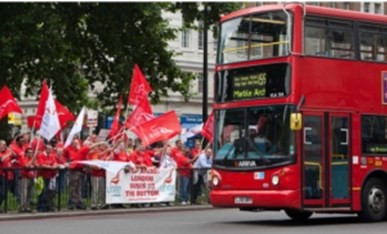 Unite will begin a consultative ballot of over 20,000 members employed as London bus drivers later this month and, provided a yes vote is secured, a full industrial action ballot will then follow.

Unite is demanding that London bus operators and Transport for London (TfL) take decisive action to tackle chronic levels of fatigue being experienced by bus drivers.

Unite is sharply critical of individual bus operators who have suggested that the solution is simply about ensuring drivers get more sleep.

Unite is instead demanding a revolution in how bus driving is scheduled to ensure that drivers can finish on time, are able to utilise all of their breaks, work to proper schedules, have enough running time to complete their journey, are treated with respect and receive proper training.

A survey by Loughborough University which was commissioned by TfL, and published last August, discovered that 21 per cent of bus drivers had to ‘fight sleepiness’ at least two or three times a week and 17 per cent had actually fallen asleep at the wheel at least once in the past year.

Since the publication of the Loughborough report, TfL has attempted to deflect responsibility for the fatigue being suffered by bus drivers and has said that it is the responsibility of individual bus operators to resolve the situation. Unite believes this position is entirely unacceptable.

A survey of over 5,000 Unite bus driver members in September found 44 per cent of bus drivers work six days a week and long hours created severe physical, mental and relationship problems. A total of 79 per cent of drivers reported that in the past year they had made errors while driving due to tiredness.

Unite regional officer John Murphy said: “London bus drivers have had enough; they are permanently fatigued and at risk of being a danger to other road users, bus passengers and themselves.

“Unite will shortly be conducting a consultative ballot and provided our members endorse industrial action, strikes will follow later this year unless action is taken to ensure that the problems causing chronic fatigue for our members are resolved.

“TfL cannot simply sweep this problem under the carpet. It must act decisively and stop trying to pass the problem onto bus operators who have consistently failed to resolve the issue and have instead allowed it to worsen.

“For the last 25 years bus operators have been failing to deal with this problem. Unite members are saying enough is enough.” 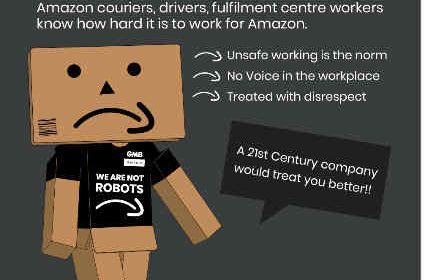 The CWU is extremely disappointed at the ruling and we have no doubt our members and representatives will feel the same way. Following 18 months of negotiations, including external mediation, the company’s actions are nothing more than a desperate delaying tactic from a board who are increasingly out of touch with the views of its workforce.

Legal proceedings and Royal Mail’s court room politics will not solve the company’s problems. The union has nothing to fear from mediation and unless there is significant movement from the company on a range of issues and a satisfactory agreement is concluded, the union will be calling further strike action once the mediation process has been completed. Furthermore, we will not allow Royal Mail to string out the process beyond the minimum required period.

CWU General Secretary Dave Ward said “The company are deluded if they believe their court room politics will resolve this dispute. Instead the company’s actions will have the complete opposite effect. Postal Workers’ attitude towards the company will harden and it makes us more determined than ever to defend our members pensions, jobs, service and achieve our objectives.”

“Unless the company significantly shifts its position on a range of issues and we can quickly conclude a good agreement for our members then strike action is inevitable. “

“We walked into the court today with a massive 90% yes vote for strike action – we walked out of the court today with a massive 90% vote for strike action. We want an agreement and will comply with the injunction to undertake further external mediation. But sooner rather than later Royal Mail Group will have to confront the harsh reality that they are completely out of touch with the views of its workforce.“

CWU Deputy General Secretary Terry Pullinger said “We saw today that Royal Mail Group would rather spend time, money and resources playing politics than engaging with this union to reach an agreement. Our members are square behind the CWU and from this moment we are putting Royal Mail on notice of further action should the mediation fail. Let me be clear – we will not stand by and see this once great institution run into the ground. Our members will stand up and save it by whatever means are necessary.”

“We will use the mediation process to seek an agreement but also to galvanise support amongst our members and the public. Be in no doubt though, if Royal Mail Group are not serious about reaching an agreement we will not hesitate to call strike action immediately after the mediation period closes.”

#mcstrike: The start of something big

On Tuesday, McDonald’s workers took strike action to demand a fair wage and a union to represent them. Thousands of supporters backed their call and made sure McDonald’s know they’re up against a powerful movement.

In more than 35 locations across the country, supporters organised McStrike solidarity actions, speaking to the public about the campaign. Their conversations are critical in building public support and putting pressure on McDonald’s.

And you couldn’t pick up a newspaper yesterday without reading about McStrike. There was coverage in The Mirror, The Guardian, The i, The Daily Mail and many more.

And this is just the beginning. McDonald’s will not back down easily, which is why your support is so important. Our movement will grow and these workers will strike again.

We will fight until these workers, and workers everywhere, get what’s fair.

This campaign will be long, so anything you can chip in will help our movement win.

Chip in to support McDonald’s workers and the McStrike

We need to show McDonald’s and the workers going on strike that our whole movement is behind them. They can’t win without your support.

Find an event near you HERE

The fight against exploitative employers, dodgy contracts and insecure work requires the support of every single community across the country.

Our recent vote for strike action in Royal Mail Group was secured by connecting with our membership in every corner of the UK – both online and on the ground.

Now we need your help to take our message to the public. By joining CWU Supporters you will be contacted with campaign materials and resources that will help us win this battle – and the others we are fighting

Be one of the first to join us by signing up below. Once you have joined us, don’t forget to hit share so that you can alert your social media networks to our new network. 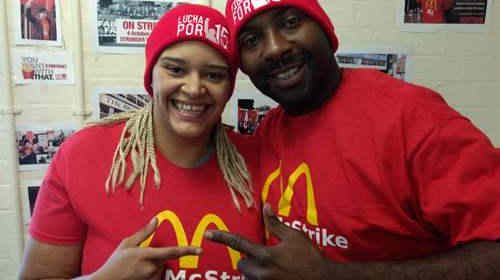 ISS staff working at BEIS have won “gold standard” terms and conditions, including the London Living Wage after 3 months of indefinite strike action.

Porters, security, post room, cleaners and receptionist staff have all taken rolling strike action in the long running dispute since ISS took over the contract in January this year.

And cleaners took the decision to take indefinite strike action for 3 months in order to win a just settlement.

Caterers working for Aramark who were also on indefinite strike won their dispute last month.

The protracted dispute saw huge picket lines, a foodbank being set up in the department because pay was so low and solidarity from across the trade union movement.

Reacting to the win by workers at BEIS, PCS general secretary Mark Serwotka said: “This has been a heroic effort by our members from start to finish.

“They have shown the entire trade union movement that when you stick together and strike together, anything is possible.

“Our members who are mainly migrant workers, have endured immense hardship with the local branch having to set up a food bank to support workers due to pay being so low.

“ISS have been a very intransient employer and if wasn’t for the steadfastness of our striking members, they would not have won a just settlement.

“This whole episode underlines the clear need for all private contracted out staff in government departments to be immediately brought back in house and given civil service pay and conditions.”

Asda workers have been told to sign the contracts – which will see them lose all their paid breaks and forced to work bank holidays – or be sacked on November 2 in the run up the Christmas.

Asda workers have been protesting outside stores up and down the country, while more than 1,000 turned out for a protest in August.

Today we are back in the birth place of Asda – once a proud, family company – calling on bosses to respect workers and offer them a better deal.

“Tens of thousands of members of the public are backing our Asda workers in their fight against these Draconian contracts.

“Contract 6 is shocking – the changes are forcing our members to choose between looking after their families, or being able to support them. It’s a disgrace.

“Today we are back in the birth place of Asda – once a proud, family company – calling on bosses to respect workers and offer them a better deal.”