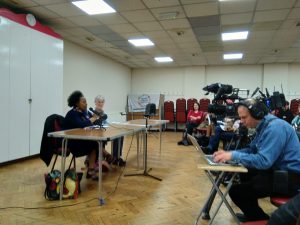 Although Diane Abbott was not able to attend the meeting last minute, due to the ongoing parliamentary Brexit deadlock, Barnet TUC and Barnet Momentum were very privileged to have an inspiring and heartfelt speech from one of the hardest working human rights lawyers in Britain. Jacqueline McKenzie has been at the forefront of fighting for the rights of the so-called Windrush Generation, a group of people affected by systemic injustice that, as she reminded the audience, most of the public only really became aware of this time last year.

McKenzie took us through some of the terrible cases she has had to deal with, involving people who frequently had no idea that their rights to remain in Britain were under threat, suddenly facing threats to their very lives and basic safety due to being deported to countries they frequently hardly knew. The background to this, she explained has been decades of increasingly severe nationality legislation. Although Theresa May’s term as Home Secretary may have ushered in the worst of it, the sad truth is both major parties have contributed over time to laws that disadvantage mainly from from majority non-white countries. This disproportionately affects the poorest and most disadvantaged of those people, who are least able to to pursue ever more complex processes to prove that they can live and work in Britain. Although many of the high profile cases have concerned Caribbean and African people, McKenzie warned that many more people can and will be affected. She cited the recent decision by current Home Secretary Sajid Javid to strip so-called “ISIS bride” Shamima Begum of British citizenship as an example of the rules being made unnecessarily tougher yet again: Begum is a defenceless teenager, with no real hope of making a life in her parents’ native Bangladesh, and taking British nationality from her has been cruel and unjust decision that too many have been slow to oppose.

We left the meeting in no doubt that our movement must to much more to fight racist, discriminatory and repressive immigration laws, and there was an impassioned plea for the event to be a starting point for greater anti-racist activity in our borough by Stand Up to Racism.

Saturday saw #WorldAgainstRacism demonstrations take place around the world in an unprecedented coordination of international solidarity for UN Anti Racism Day.
These demonstrations came a gravely poignant moment, taking to the streets the day after the horrific racist massacre at two mosques in Christchurch, New Zealand. The London Demonstration stopped off at New Zealand House to lay a wreath for the victims of the atrocity, and speaker after speaker pledged solidarity with Muslim community in challenging the horrific and growing wave of Islamophobia.
The horror we witnessed in New Zealand – like the attacks that took place on a synagogue in Pittsburgh, and a black congregation in Charleston – underlines why these marches are so important – we need to build mass anti racist movements internationally to oppose a growing, murderous far right.
The #WorldAgainstRacism initiative is a major step forward for the global anti-racist movement, taking a positive message of multiculturalism and diversity onto the streets and bringing together the most powerful alliance possible to challenge the rise of racism, fascism, Islamophobia & antisemitism.
In Britain, the fantastic support from #Unions4Unity and the inspiring engagement from Love Music Hate Racism‘s #BeautifulResistance campaign involving major labels and artists, along with a broad range of speakers from the TUC, the unions, Muslim and Jewish organisations, campaigners from Windrush to justice over deaths in custody, and prominent figures like poet Michael Rosen and Chelsea’s first black player Paul Canoville, took the unity of the anti racist movement to a new level.
We have much work to do in the coming months to deepen and strengthen this movement – we need your support!

United Against Racism: Justice for Windrush 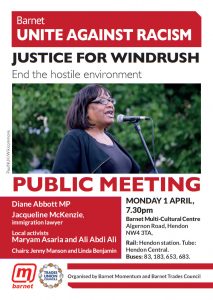 Barnet goes to the Anti-Racism Demonstation 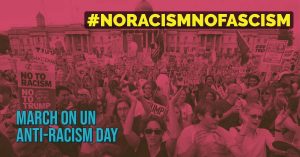 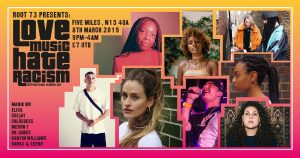 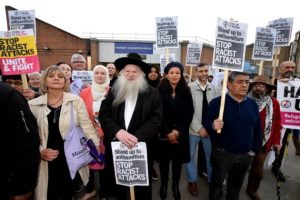 Opposing Racism in the Time of the Hostile Environment 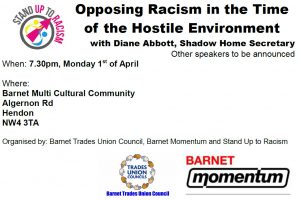 RISE OF THE EUROPEAN FAR FIGHT: LESSONS FROM THE BALKANS WAR 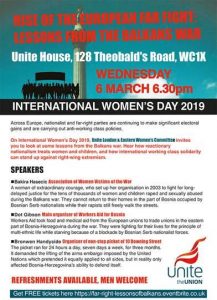 Windrush: Impact into Action Briefing Update is now accessible from the Serious About Solutions home page at https://www.seriousaboutsolutions.com

February 4, 2019 Kieran Crowe
Last week, on Friday, Owen Haisley was snatched by the Home Office when attending the Salford registration centre. Owen arrived legally in the UK in 1977, with his mother and sister, when he was just four years old. He has three children, all of whom have full British citizenship. He is a drum and bass/ jungle MC, music tutor and community worker (AKA Madrush MC), and has been part of the Manchester music scene for his entire life.
He has been detained and is currently being held at Harmondsworth Removal Centre. Along with 50 other people, he is due for deportation to Jamaica on Tuesday 5th February – the day before the #Stansted15 sentencing.
This is the first plane to attempt to deport people to Jamaica since the Windrush scandal. They will be escorted by large numbers of security personnel. There are more than 50 people who need our immediate support.
The flight is due to leave on Tuesday. Sign the petition and find out what you can do to show solidarity here
« 1 2 3 4 5 6 … 8 »