Justice for Emanuel: worked until death at the MiNISTRY oF JUSTICE

Emanuel was a cleaner at the Ministry of Justice who tragically passed away from suspected COVID-19 on April 23, at around 10.30pm. In the 5 days leading up to his death his he had an incredibly high fever, was delirious, and had not eaten. He should have taken time off work to rest and seek medical treatment but both his direct employer OCS and the Ministry of Justice refused to pay his wages if he missed a days work due to illness – even due to COVID-19. They also refused to pay him a living wage and only paid him £9.08 an hour.

For fear he would be unable to pay his rent, buy food or support his family if he lost his wages, Emanuel felt left with no choice but to continue working without even being provided with a face mask at the MoJ and having to take cramped public transport. He worked until the day before he died. His death was reported in the Guardian here.

Now we are mourning his death and his family need support.

Christmas Social in Aid of the Homeless 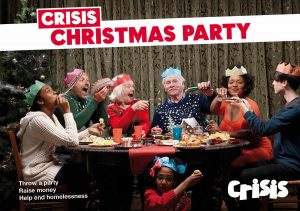 Food and beverage will be available to buy from behind the bar. As it is so near christmas we have decided to have christmas theme – donation at the door – proceeds to Streets Kitchen which will be used for distributing meals/clothes/info for the homeless.

Come along and help support the Save Barnet Libraries Campaign!!

Why not enter the lyrics competition? – we’re looking for library themed entries sung to these carol tunes, (winning entries will be performed on at the concert):
Oh Come All Ye Faithful 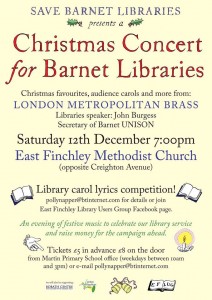